As per the GST Council’s tweet on Saturday, June 18th, 2022, the location of the 47th meeting of the GST council has been moved from Srinagar to Chandigarh. The meeting is to be held during June 28th-29th.

The meeting of the appointed Group of Ministers (GoM) has already been conducted. Karnataka Chief Minister Basavaraj Bommai leads the GoM.

The Group of Ministers (GoM) in the meeting, fully in the agreement have decided to raise the GST to 28% (from 18%) on casinos, race courses and online gaming. 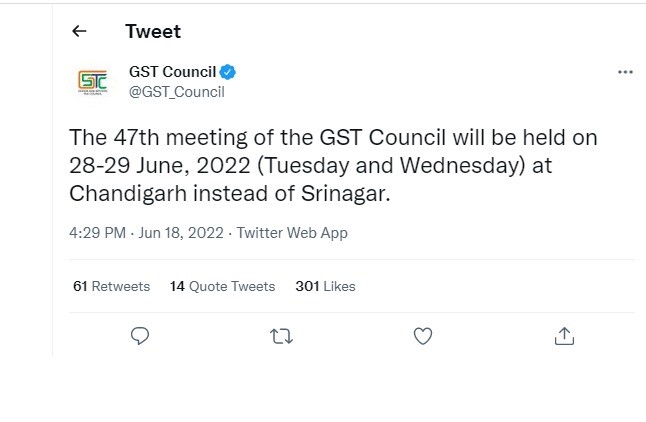 The Council is likely to discuss:

During the month of May, the Supreme Court in a ruling has said that, the GST Council is only a recommendatory body, hence, the recommendations are not binding either on Centre or States.

Further, it was held that:

The GoM will submit the final report before the Council’s meeting.
In the meantime, the meeting of the CGST Department (Lucknow Zone & Meerut Zone) was also conducted as on Sunday, i.e. June 20th, in which officers of both zones were present.