India, US to Continue Efforts to link Investment with Trade 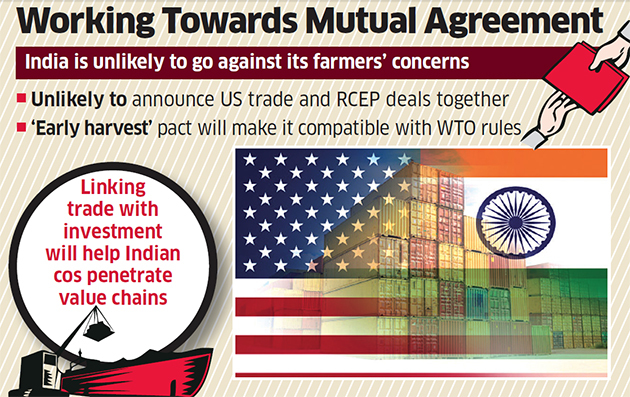 The US wants India to do away with price controls on medical devices such as coronary stents and knee implants with innovative features and keep them separate from mass products. NEW DELHI: India’s bilateral trade talks with the US will continue when commerce and industry minister Piyush Goyal meets US commerce secretary Wilbur Ross on the sidelines of the India Economic Summit later this week. Goyal will also have a call with his American trade counterparts in the next few days.

“The US is positive and only small issues are left. The talks are on,” said an official. During his visit to the US last week, Goyal met heads of key medical devices companies, and the two sides seem to have reached a mutually satisfactory resolution on pricing of medical devices.

He met US senator for New Jersey, Robert Menendez, and US ambassador Kenneth Juster to “deliberate over strengthening of trade relations between the two countries,” the minister’s office tweeted on Monday. However, sources said India will not go against its farmers concerns and also ruled out the possibility of India announcing its two mega trade deals—with the US and the 16-country Regional Comprehensive Economic Partnership (RCEP)—together. According to persons familiar with Indo-US trade matters it should be an "early harvest" agreement so as to make it compatible with the World Trade Organization (WTO) rules. In the past, India had an "early harvest" agreement with Thailand and it worked well.

Further, efforts are on to link trade with investment—both outward (as in the case of Petronet's investment in Texas) and inward—so as to take advantage of the lowering of corporate taxes. This will help Indian companies penetrate value chains. Market access to American agricultural and dairy commodities, restoration of Generalized System of Preferences (GSP), price controls on medical devices, duty cuts on Harley Davidson bikes and information and communication technology (ICT) products are the key areas of negotiations among a host of trade issues that the two sides have been trying to resolve.

“Out of the 28 products from the US on which India imposed higher tariffs after the withdrawal of the GSP, we should focus on lowering tariffs on those products which are originating from the swing states in America,” said Bipul Chatterjee, executive director at The CUTS International, a global public policy research and advocacy group with presence in capital cities like Washington DC. “We should also see how much more concession that we can give to other products originating from those swing states...

Future Indo-US trade and investment relations should be balanced and aligned with the objectives of the ‘Make in India’ programme,” said Chatterjee. The US wants India to do away with price controls on medical devices such as coronary stents and knee implants with innovative features and keep them separate from mass products. It had asked India to scrap the 20% tariff on ICT goods for which New Delhi had considered fixing a threshold price, beyond which it can levy customs duty on mobile phones, smart watches and telecom network equipment.

To accommodate the US’ demand on market access for its dairy products, New Delhi wants Washington to ensure that such imports would not violate religious beliefs with veterinary officials certifying that the source animal was not raised on feed made of bovine extracts.